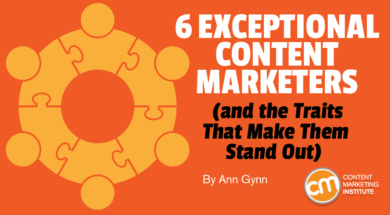 What makes a content marketer great? You’ve probably asked this question as you thought about your career progression or wondered how to establish credibility to advance your content program.

We studied these six 2022 Content Marketer of the Year finalists (including the two winners) for clues.

Each finalist this year worked on a winning entry in at least one category in the Content Marketing Awards. But they have at least one other characteristic in common, too. While they receive the honor as individuals, they all say they simply represent the excellent work performed by the teams that initiated, created, published, and distributed their content marketing.

With that understanding, let’s peer into what makes these 2022 Content Marketer of the Year winners and finalists stand out.

Want to be notified when the 2023 Content Marketing Awards call for entries opens? Subscribe to CMI’s weekly newsletter.

1. They make it personal 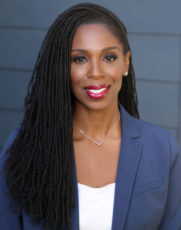 Handling the responsibilities of her high-profile job keeps Ebony Beckwith’s days busy. In 2021, she willingly added host and interviewer of Salesforce’s LinkedIn Live series #BossTalks to her duties.

In each of the 22 episodes, Ebony brings herself to the job, chatting about the things she has in common with the influential guests. She’s tackled imposter syndrome with NFL player Kelvin Beachum, for example, and talked about letting go of perfectionism with TIAA CEO Thasunda Brown Duckett.

“We saw this series as a way to familiarize a new group of LinkedIn users with what Salesforce does,” the company explains in its CMA nomination form.

Page views for the blogs exceeded expectations by 15%, but the average time on page blew their assumptions away – #BossTalks is in the 100th percentile of all content published by Salesforce. An article about being Black in corporate America kept visitors reading for an average of seven minutes, 42 seconds. An article about finding one’s voice at work retained readers for an average of eight minutes, nine seconds.

Anecdotal feedback also shows how Ebony’s series resonates with viewers. As one wrote on LinkedIn, “You have no idea how much I needed to read this and see this. Thank you.”

A personal touch matters. @EbonyBeckwith #BossTalks average time on page ranks in the 100th percentile for all @Salesforce #content, says @AnnGynn via @CMIContent. Click To Tweet

2. They create with a specific audience in mind 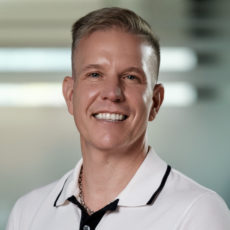 When NBC Universal acquired Sports Engine in 2016, Rob Bedeaux took on a weighty mission: to attract young people’s interest in the Olympics.

NBC had paid $7.75 billion to extend its exclusive rights to broadcast the Olympics through 2032, and it wanted to make sure to engage youth who would grow into adult viewers over the lengthy contract.

That was one of the reasons NBC acquired Sports Engine, a provider of web software and mobile apps for youth, amateur, and professional sports, and created NBC Sports Next, a youth-focused platform to introduce families and kids to new sports.

As Rob developed the first digital Kids Guides to the Olympics for the pandemic-delayed summer Tokyo Games, he kept one question in mind: Will this be interesting to an 8-year-old?

He soon got the answer. Launched in June 2021, the 122-page guide included explanations and athlete highlights for every sport, plus crossword puzzles, word scrambles, drawing challenges, and trivia.

The Tokyo Games guide earned over 10,000 downloads and prompted 100 requests to be notified about the Beijing Games guide. Then, with less than six months before the next Olympics, Rob and his small team quickly tackled the Kids Guide to the 2022 Beijing Winter Olympics and Paralympics.

That one generated more than 12,000 downloads.

The data answered Rob’s question – the guide did interest the young audience Rob kept top of mind. But he found more moving proof among the children themselves. At an event where the printed versions were distributed, some asked for two copies. They wanted to write in one and keep the other pristine.

3. They develop (and double-down on) successful models

Diane developed two independent editorial publications made possible by an exclusive sponsor. The single-sponsor editorial content model first appeared in 2020 with the launch of Millie Magazine, a finance magazine for women. Published four times a year, Millie mails along with Real Simple magazine to a targeted group of subscribers. It includes four pages of advertising from Synchrony, which signed on for a three-year exclusive sponsorship.

The model proved to be a win-win for the studio and the sponsor. Synchrony gets 100% share of voice, Diane explains, and Dotdash Meredith gets an immediately profitable content product.

The success of Millie’s content model led to the 2021 launch of Paw Print, a magazine for pet owners of at least one cat and one dog. Mars Petcare signed on as the exclusive sponsor, receiving four pages of advertising in each of the magazine’s two issues per year. 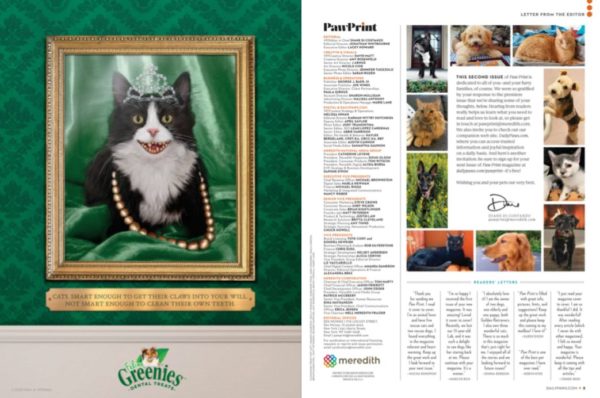 After the first issue was mailed to 1 million readers, Diane’s team asked the audience what they thought. “We’re rigorous about conducting surveys of how our products are doing in the marketplace because we don’t have typical feedback of subscribes or unsubscribes,” Diane explains.

The survey found readers spent an average of 80 minutes consuming the magazine, with nearly three in four saying they read every page. Almost all (98%) say they look forward to the next issue, and even more (99%) indicated they’re likely to act on something they read.

These readers also are turning into ambassadors for the magazine, with 93% saying they plan to share or discuss the magazine with friends and family. Most importantly for Mars Petcare, eight in 10 readers say they’re likely to purchase a product featured in the issue.

That feedback contributed to the decision to expand Paw Print’s circulation to 1.25 million for its second issue. And her leadership on these projects led to her recognition as the 2022 B2C Content Marketer of the Year.

4. They excel at leading change

Matt Hartley arrived at TD Bank Group to scale the TD Newsroom. Launched in 2018, the newsroom had evolved to serve an internal audience – only 10% of visitors to the site came from outside the bank.

Matt led the effort to reimagine the site to serve external audiences. As part of that effort, TD Newsroom rebranded as TD Stories.

It made sense on many levels. First, TD Stories operates within the corporate and public affairs department. “We tell stories aligned with those communication goals – not necessarily to sell something. It’s about brand building, thought leadership, and financial literacy,” Matt says.

In 2021, traffic grew more than 125% over the previous year, and importantly, 98% of traffic now comes from external sources.

The relaunch of the former newsroom site fundamentally changed how TD Bank interacts and communicates with its audiences.

5. They challenge the industry players 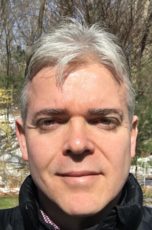 Four years ago, Nick Lake faced a blank piece of paper. His assignment: to build a content marketing strategy and team for Pega, a B2B brand for low-code AI-powered decisioning and workflow automation.

As a smaller company competing against some of the best-known companies in tech, Pega operates as a challenger brand. So Nick set out to make Pega stand out in the sea of sameness. “We have permission to play on what comes next,” Nick says.

What came next turned out to be a look at what’s coming next for its audience. Pega’s Future of Work program included original research based on a survey of more than 3,000 senior business leaders and frontline IT staff. From that survey, Nick and team spun off niche-focused reports based on specific personas, including the Future of Operations, the Future of Marketing, and the Future of Customer Service.

The success of the Future of Work campaign led to Nick’s next content initiative, GO! Magazine. Moving away from the boring, stuffy traditional business communication, GO! is a beautifully designed, journalist-written publication. (And its quality is one of the reasons Nick earned the title 2022 B2B Content Marketer of the Year.)

GO! operates as both a digital and print magazine. The Pega sales team circulates the print version, which serves as a conversation starter and leave-behind. The digital version, localized in six languages, drives regional marketing.

Audiences are responding. Between its second and third month, magazine page views jumped from 80,000 to 101,000. Average time on page increased by 27% between the January launch and the end of March in the magazine’s first quarter. It was the most visited page outside of the home page.

Go! Magazine helps challenger brand @Pega stand out in a sea of sameness, thanks to the leadership of @NickLake1, 2022 B2B Content Marketer of the Year via @CMIContent. Click To Tweet

6. They know how to scale

When Sarah Tolle joined the company in 2018, Black & White Zebra consisted of three people: the company founder, a creative director, and herself. Four years later, Sarah oversees a team of about 30 people who create and run the company’s 10 niche business-focused publications.

“Scale comes from how well we can build a system to facilitate real people who work in these fields,” Sarah says.

In 2021, the team published over 170 pieces of content, mainly contributed by digital project professionals. The site attracts 400,000 monthly page views, but The Digital Project Manager is a decidedly multimedia endeavor:

The Digital Project Manager almost doubled its revenue goal in 2021, bringing in more than $9 million.

What do you think makes a content marketer exceptional?

Take some time to reflect on what you think makes a content marketer shine. I’d love to hear your thoughts in the comments. 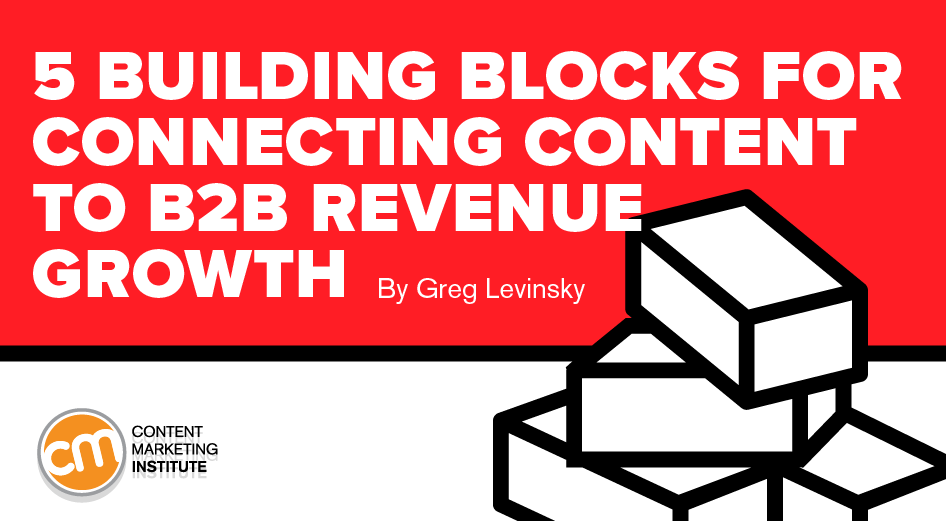 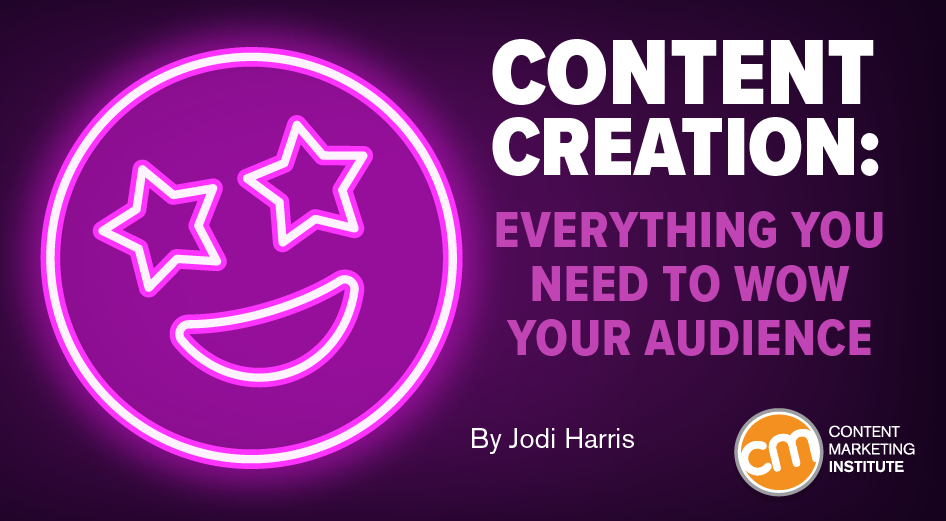 Content Creation Process: Everything You Need To Wow Your Au... 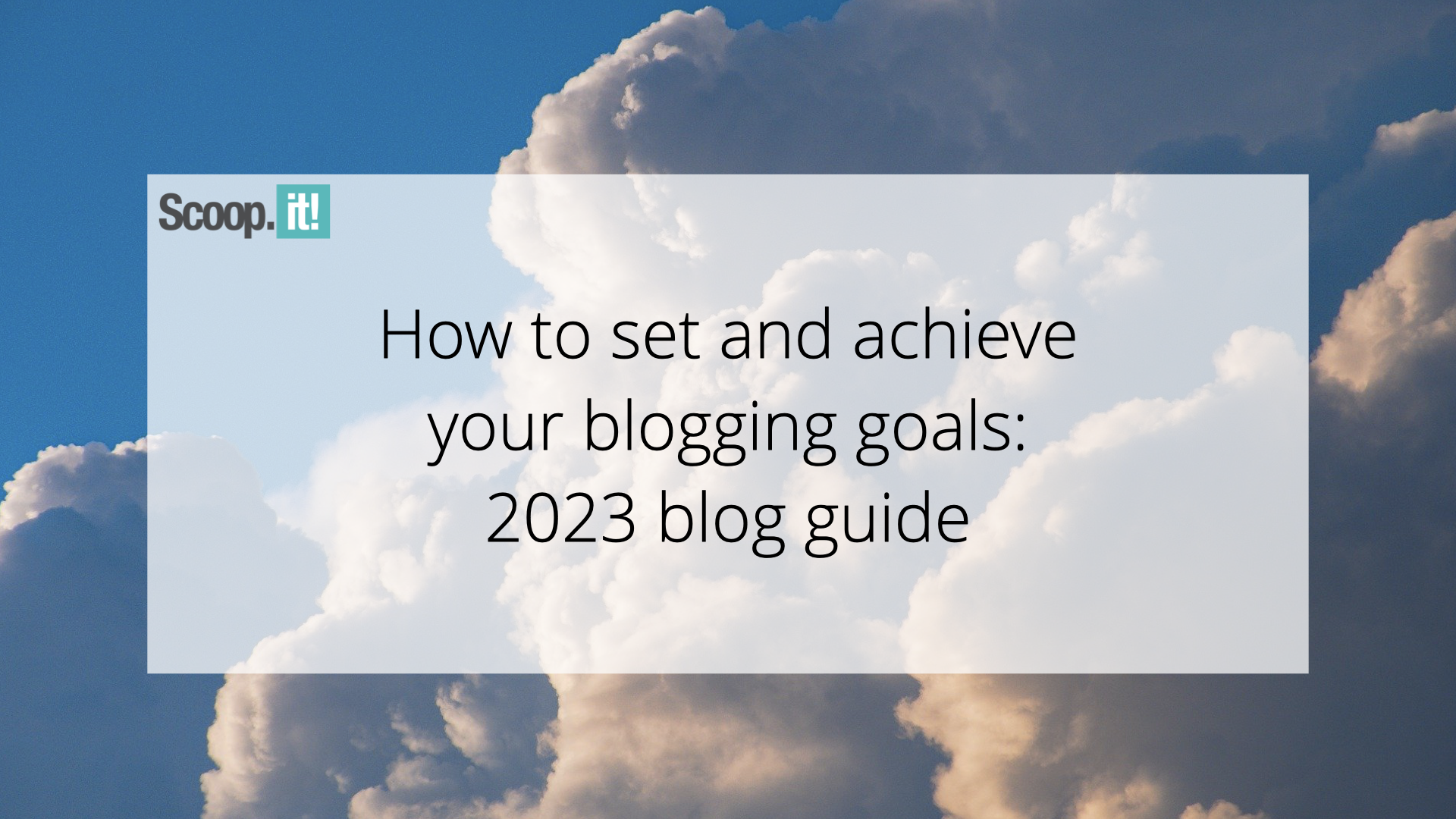 How to Set and Achieve Your Blogging Goals: 2023 Blog Guide 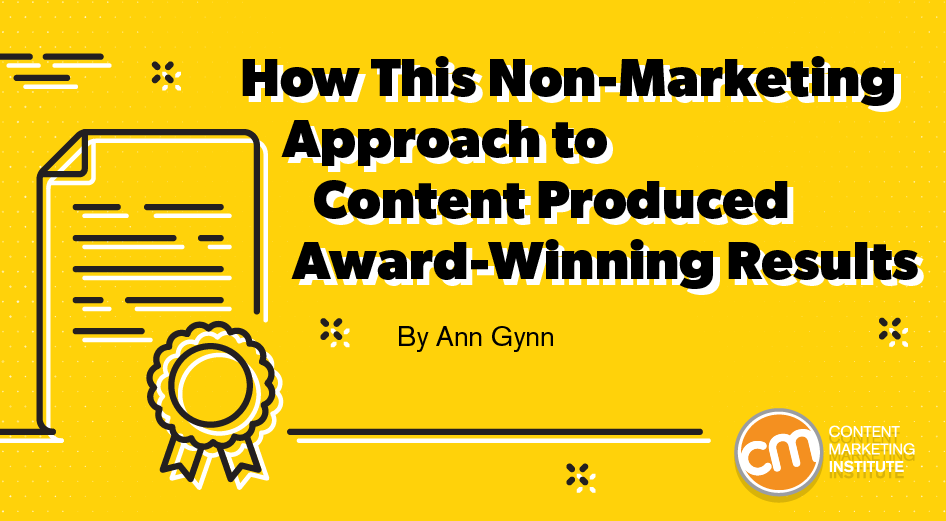 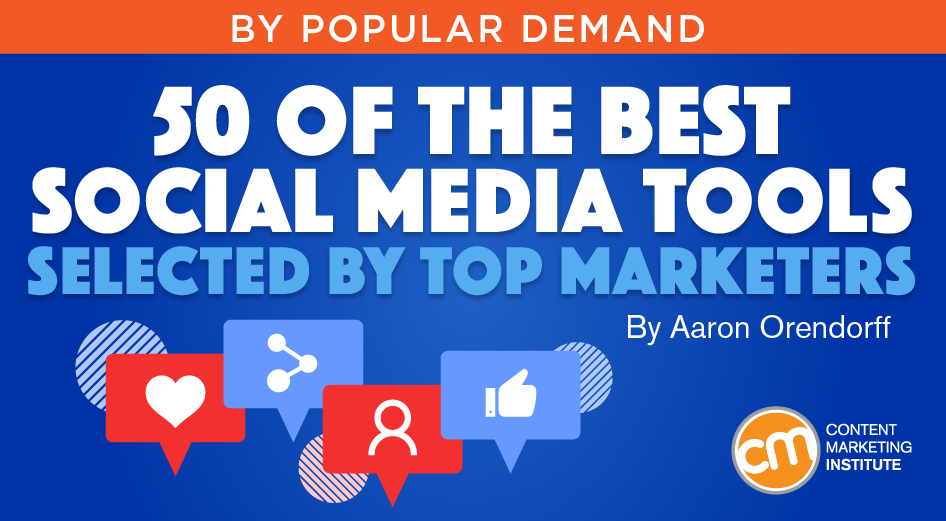 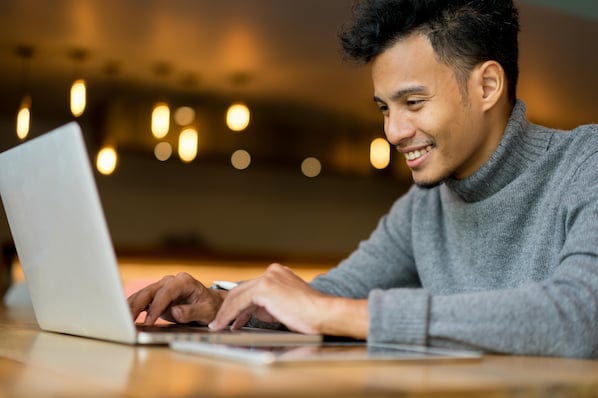 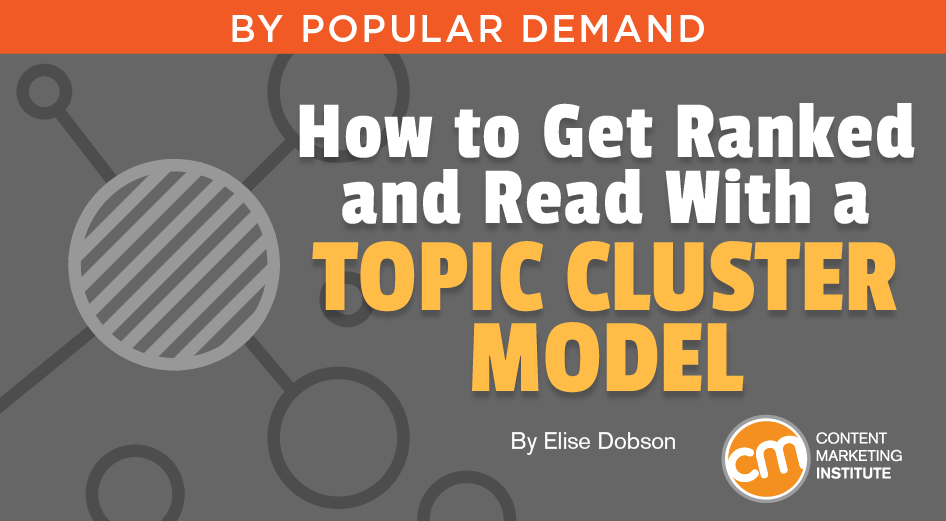 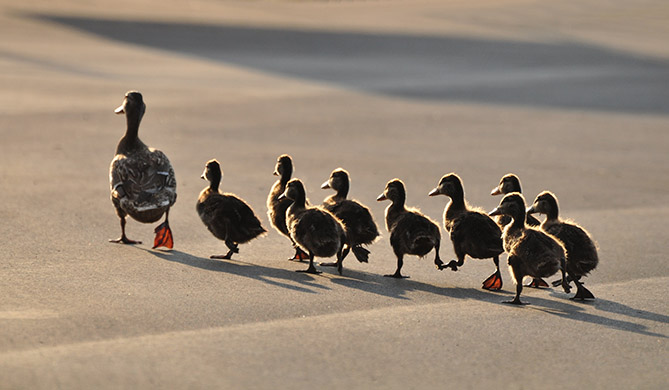